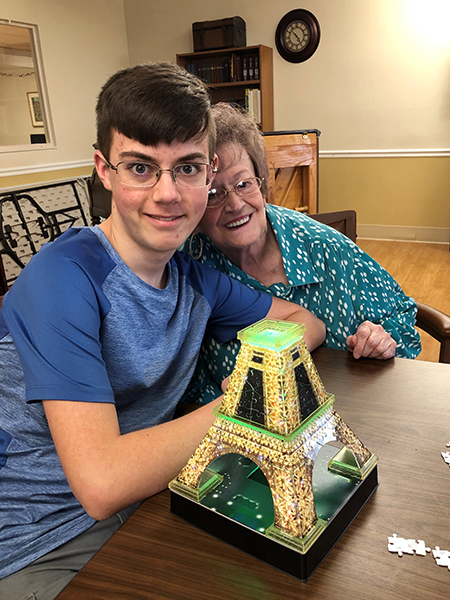 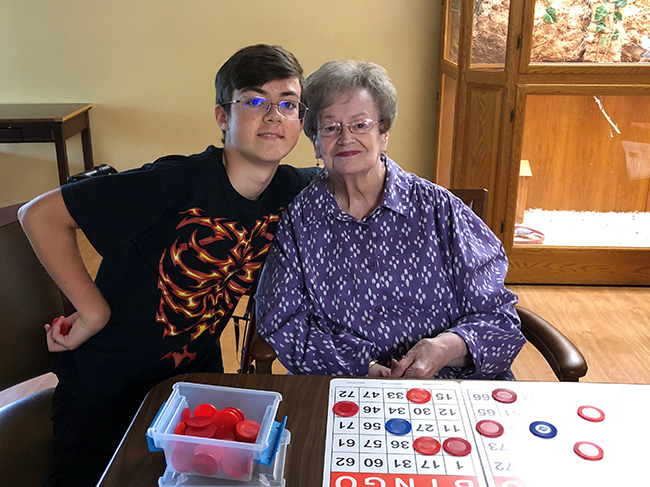 When a New Haven teenager working to communicate better met a woman in a nursing home four years ago, it was the beginning of a friendship with real staying power.

“Communication is really hard for many autistic children,” said Cris Hathaway, discussing her son Aaron, now 17. “He wasn’t giving proper responses sometimes when people would ask him something. Whatever was going on in his head, he would just blurt out.”

Toni Printzos, a behavior consultant with Easterseals Arc, was working with Aaron. She thought he could benefit from practicing conversation and socializing with an adult he hadn’t met before. Printzos could coach him as he got acquainted with someone new. She and Aaron went to Majestic Care of New Haven looking for a resident willing to spend time with Aaron. A staff member at the nursing home steered them toward Susan Closson, now 78.

Aaron and Closson bonded over many things they like to do together. They read books Aaron had selected from the library, taking turns reading a couple of pages each. They built puzzles together and played bingo with other residents. Closson enjoyed seeing Aaron perform with The Jesters. “He would stand on stage and wave to me to make sure he got my attention,” she said.

Their connection endured and strengthened through Closson’s move almost a year ago to Lutheran Life Villages on South Anthony Boulevard and several health problems for Closson.

Closson, who has no children or grandchildren, has school photos of Aaron and photos of the two of them together on her windowsill, “where I can look at them every day,” she said.

Hers isn’t the only photo display in their friendship. “Aaron has a picture of the two of them together, right next to his bed. She’s his special friend, for sure,” Cris Hathaway said.

There were a few rough spots to navigate early on. But Closson and Printzos have worked with him to help him tame his expressions of frustration and to learn how to converse and socialize.

“I think she really helped him,” Hathaway said of Closson. “He doesn’t get as frustrated. I think he really does listen better. His responses are certainly more appropriate. She’s been fantastic at helping Aaron with that and with understanding emotion.”

He’s improved enough at socializing that he now works as an intern in the library at Woodlan High School, helping many different students with books. Closson started introducing him to her fellow residents. Those introductions showed her what a powerful memory he has.

“He meets someone, he never forgets their name,” Closson said. “I don’t care if he’s only met them once.”

Certainly, there’s no chance Aaron is forgetting Closson. “Now with the virus, we can’t see each other,” she said. But until the risk posed by the coronavirus recedes, they make do. Sometimes they’ve arranged for Closson to call Printzos while she’s working with Aaron. And Aaron sends her notes and cards, from a simple “Thinking of You” to holiday greetings.

“He never forgets my birthday or Christmas,” Closson said. “If I get sick, he makes me a card. He’s really a wonderful boy. I couldn’t ask for a better kid. Anywhere.”

And Aaron, described by his mother as a very friendly kid who wants to be around people, has learned a lot about how to succeed at being a friend. Aaron isn’t sure what kind of job he’d like when he leaves his school, but he knows he wants to work with people. “I’d like to work with someone else. I’d like to be a helper!” he said.