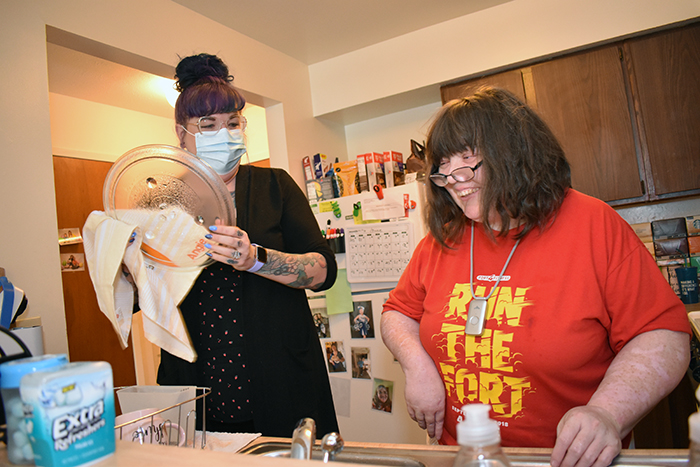 For many years, Angie’s goal has been independence. She’s closer than ever now and can reflect on why she wants to accomplish so much on her own. Independence seems like a necessity to her, but being more self-sufficient brings its own rewards, too.

Born without much control of her right arm, she works every day to navigate a world built for two hands. She uses a cane or walker to get around. She cannot drive, but she’s learned to use Uber rides when Easterseals Arc staff member Cassie Bisig isn’t there to provide a ride. And though she knew barely any arithmetic when she transferred to St. Charles Borromeo School about 30 years ago, she now manages her own finances with only Social Security benefits for income.

She’s certainly had help at every stage. She credits the faculty at St. Charles for helping her learn the math she needs to track and plan her spending now. Learning single-handed workarounds for daily tasks began when she was a little girl and her mother devised ways to perform tasks around the home with one hand so she could provide an example to Angie. As an adult, Easterseals Arc has been her steady partner; these days, that means Bisig is there to check in on her, help get her to medical appointments and assist in her apartment when needed.

Bisig has known Angie since they were both children at St. Charles. No one is more admiring than Bisig at seeing all Angie, 40, has accomplished. Angie “has become almost completely independent in her everyday life — schedules all her appointments, manages her own healthcare (and medications), and started using Uber when I’m unavailable,” Bisig said.

Angie also tracks her own spending, pays her own bills and has earned a credit rating that millions of American consumers would envy. She manages two credit cards. “I try to keep track of what I spend. Certain months I go overboard,” Angie said.

For the last five years, she’s done all this while living in her own apartment, without a roommate, on the northeast side of Fort Wayne. Moving into her own place “was important because I wanted to make sure I was set for when my parents could not take care of me,” she said.

And being independent has given her the freedom to decide that some rules don’t make much difference.

“It doesn’t matter if your clothes match (in the washer). You can throw my clothes in together,” she said.

Becoming as independent as possible helps her continue her volunteer work. She finds great satisfaction in contributing to the work of many charitable organizations.

High on that list is Heartland Hospice, where she’s volunteered for 21 years, mainly by scanning volunteer notes and performing other office work. “It’s basically the camaraderie with the staff, who are very nice,” Angie said, explaining the pleasure of working there.

She also volunteers at The League one or two days a week. She also helps with the Aktion Club, Big Brothers Big Sisters, the Great American Clean-up and the Kiwanis Club during the Johnny Appleseed Festival.

"I wanted to make sure I was set for when my parents could not take care of me."