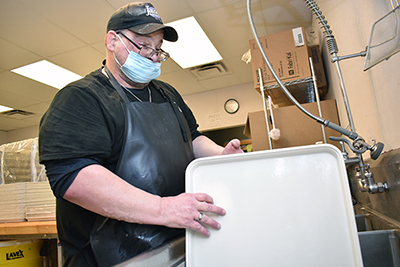 After six months on the job at Jack’s Donuts, David loves his job.

“I love the atmosphere here,” he said. He enjoys working closely with a small, tight-knit group of employees. Much of his job is washing trays and utensils. When time allows, he helps out in other ways, too. He folds boxes by the dozen into shape to be filled with donuts. Sometimes he does light cleaning in the kitchen, such as wiping down doorknobs and table legs.

Owner Jaimee Wilkinson appreciates David’s great attitude and reliable, consistent work ethic. “He’s always on time. He’s always up to do anything we ask him to do,” she said.

Before he landed this job through Easterseals Arc, David went through the Employment Readiness Academy, working jobs in several different areas at Parkview Hospital. Another advantage David brought to this job is that he had washed dishes at several other places, including Azar’s, Ponderosa Steakhouse and Lone Star Steakhouse and Saloon.

Since starting at Jack’s Donuts, David has taken on more duties at the shop, Wilkinson said. For example, he sometimes helps the production crew move heavy mixing bowls of dough. David also has grown comfortable enough among employees and customers that he sometimes comes out of the kitchen to help in the front of the shop, too.

For David, a big part of the appeal of Jack’s Donuts is that he’s an accepted and appreciated part of the team.

“They like me here,” David said. “When my mom comes in here, Jaimee sits with her and tells her how good my work is.”

"For David, a big part of the appeal of Jack’s Donuts is that he’s an accepted and appreciated part of the team."