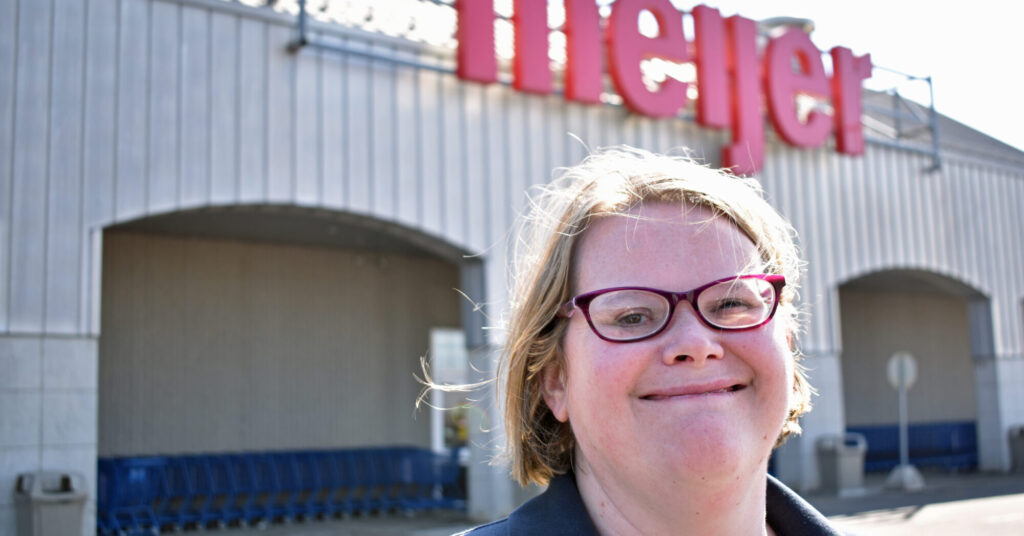 Melissa works three days a week at the Meijer store in Angola. 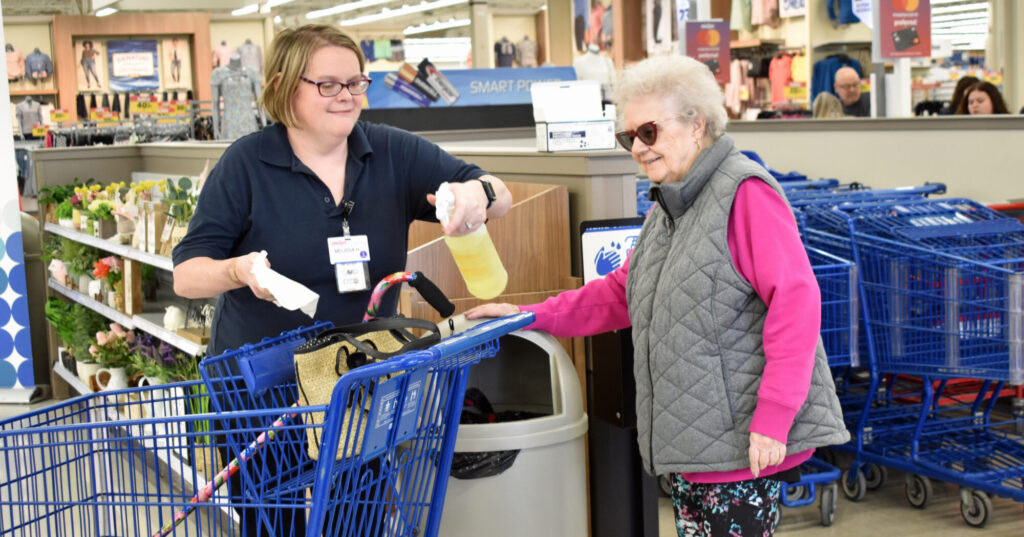 Melissa sanitizes a cart for customer Judy Thimler at the Angola Meijer store. 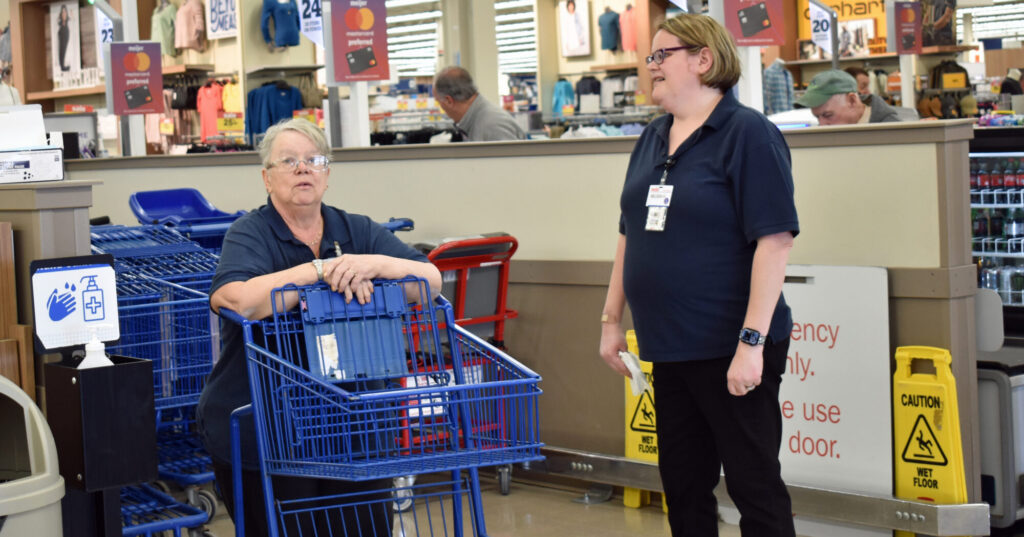 Meijer cashier MIllie Wilson chats with Melissa. “She’s such a hard worker. She’s always been nice to me,” Wilson said of Melissa.

For a long time, Melissa wanted to work in a store. She’s found success at the Meijer store in Angola.

Melissa began working there in October 2020; now she’s been there more than a year-and-a-half. She’s a greeter who works 8½-hour shifts three days a week, with a half-hour lunch break in the middle and two other 15-minute breaks daily.

Employment services staff from the Easterseals Arc network helped her land the job and learn to perform the work. Now she’s so adept that employment specialist Kirst Matherly only needs to spend about half an hour a week with Melissa, watching her work and checking in to see whether she has any concerns about her job. Matherly now finds that Melissa’s concerns are more often about how to move up at Meijer.

“She has a really strong work ethic,” Matherly said. “You can tell she really wants to be at work.”

Melissa says she enjoys the work at Meijer. “I always wanted to work in a store,” she said.

She demonstrates how she’s taken to working at Meijer in the way she treats customers. Midway through her shift one day, customer Judy Thimlar stops to ask where she can sanitize her shopping cart.

Melissa points out a station close by where sanitizing spray and wipes are available. Then she goes one better: “Do you want to do it yourself or let me do it?”

“She’s always very pleasant, and that means a lot in this day,” said shopper Cindy Bush, after she’d stopped to chat with Melissa on her way into the store.

The money Melissa earns working at Meijer allows her to save for special purposes, such as a June vacation to South Haven, Michigan, with her roommates and the parents of one of her roommates.

“I know in the future, me and my fiancé are going to get married,” she added, explaining another important reason she likes to save money she earns.

But when she talks about the greatest pleasure she derives from her work, it’s the people, not the pay.

“I like the people and greeting the customers,” she said.

Melissa said she especially enjoys helping customers find what they’re looking for. She knows where many products are.  “If I don’t know, I direct them to someone else,” she said.

Before she directs customers to another employee, she often checks an app on her mobile phone which lets her search the store’s inventory. That’s what she did when a customer asked her where she could find herbal tea. After a minute with her phone, Melissa pointed the shopper in the right direction.

That’s part of what Elijah Vance, Melissa’s supervisor, appreciates about her work.

“She’s definitely one of the more involved people” among employees on his staff, he said. She’s a greeter who’s quick to offer to help a customer get a shopping cart, he said.

She also shows initiative in staying productively busy, he said, whether by collecting trash and recyclable material from waste containers, sweeping her area to keep it neat, or helping other employees maneuver long rows of nested shopping carts they’ve steered in from the parking lot.

Melissa also shows good initiative in developing herself as a store employee.

“She wants to know how to do more for the store,” Vance said. Shortly after he became her supervisor in February 2022, she asked him how to become a Level 4 employee. That’s mainly a measure of an employee’s attendance and punctuality, and Level 4 is the top level.

“Now she’s just days from being a Level 4,” Vance said.

"She has a really strong work ethic. You can tell she really wants to be at work."