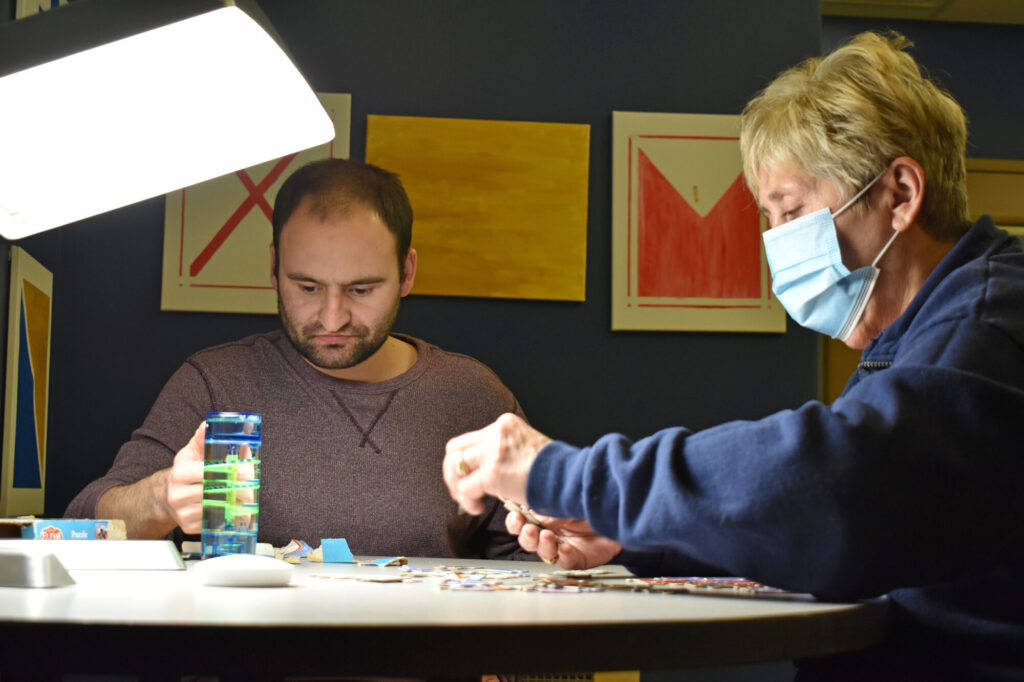 In the sensory room near the Adult Day Center at Easterseals Arc, Tyler likes to watch people build his favorite jigsaw puzzle. Gloria Beau says that sometimes she assembles the puzzle four or five times in a row, because Tyler prompts her to do it again and again. 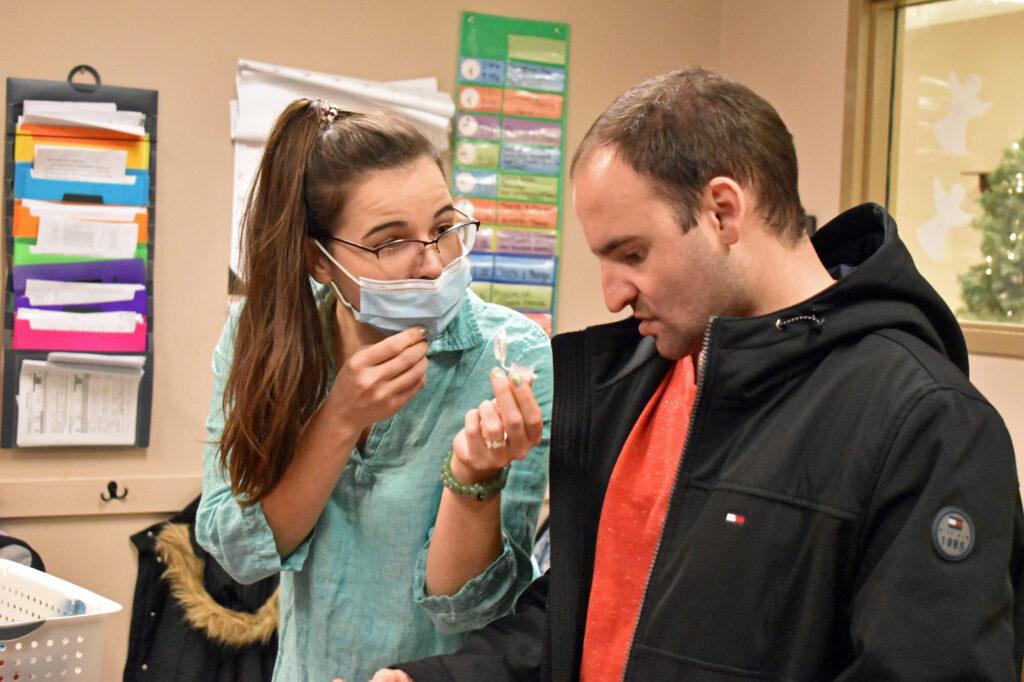 Behavior consultant Heather Schillinger pulls her mask below her nose to smell a vial of scent that she then offers to Tyler. Tyler, who is nonverbal, particularly enjoys smelling these vials from a “sensory box.” 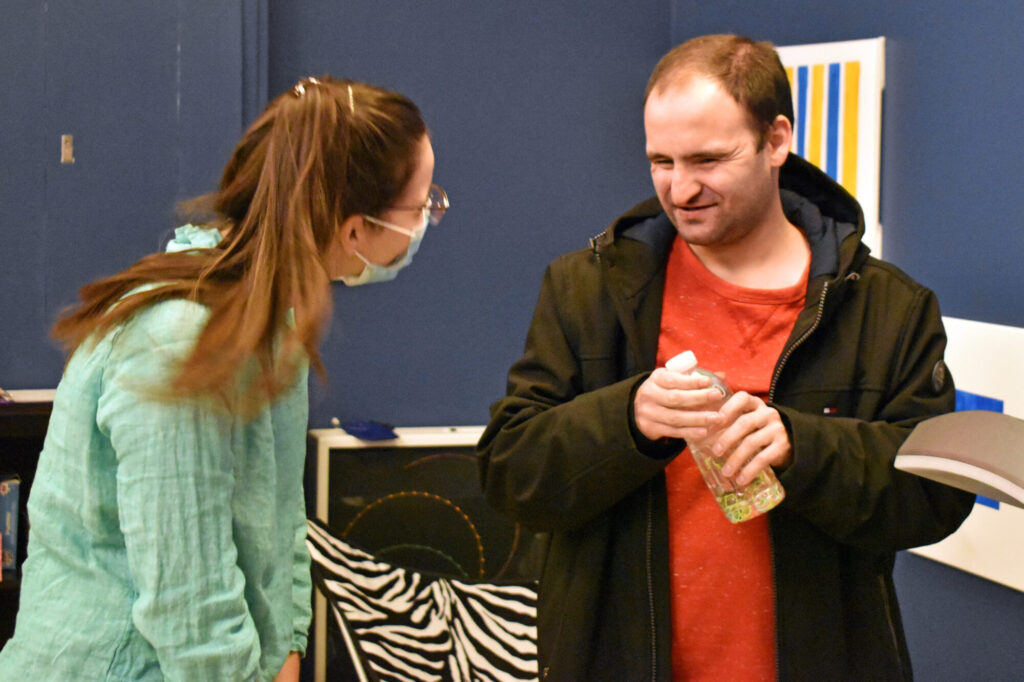 Tyler smiles as he handles a bottle filled with small objects and water. 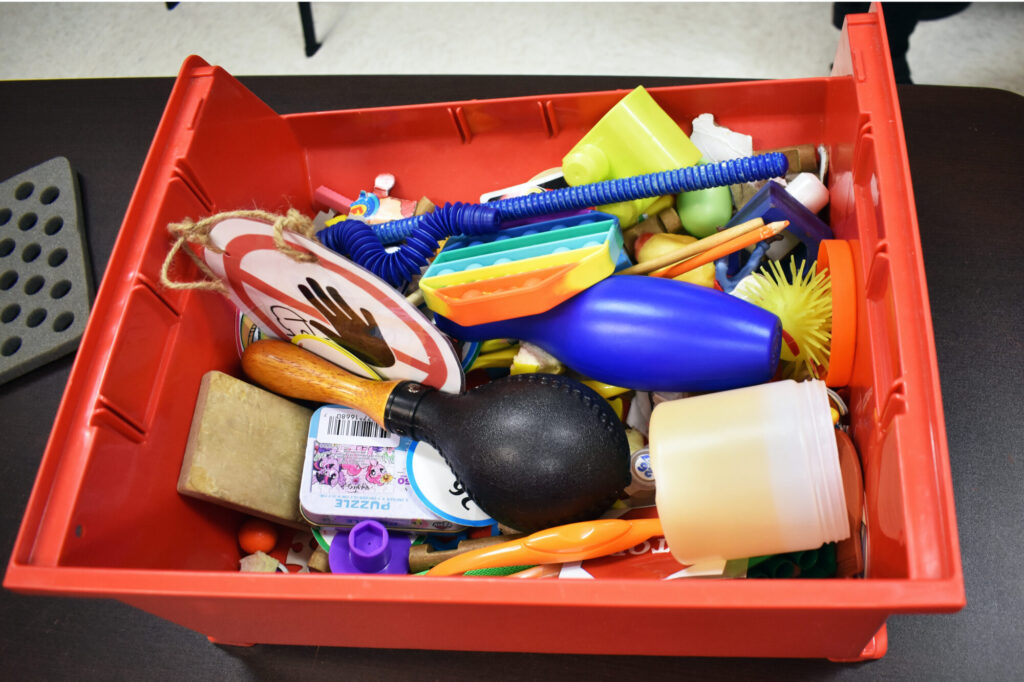 Tyler has a box at Easterseals Arc’s Adult Day Center filled with objects he likes to manipulate.

When Tyler, 27, moved into an Easterseals Arc group home in 2021 and began attending the Adult Day Center, staff members saw the challenges they and Tyler faced.

Tyler can speak only a few words, and he doesn’t speak those few words often. Being nonverbal makes it the harder for him to adjust to change, and he’s never had to work through as much change as he experienced in the last year-and-a-half.

At the Adult Day Center, Tyler was prone to roam for the entire day, apart from lunchtime. His inclination to roam wasn’t just a test of staff members’ stamina. It had the potential to endanger him. Patrick Esslinger, a supervisor in the Adult Day Center, says that if Tyler slipped away from a staff member accompanying him, he often headed for the parking lot – or toward Coldwater Road. He enjoys going for rides so much that he would climb into any van or car that was unlocked.

He also was fascinated by other people’s hair. However, his feeling and stroking hair could turn to pulling hair. He could unintentionally hurt someone, particularly a person with long hair.

Ever since he moved into an Easterseals Arc group last year, staff members and supervisors have worked intensively with him.

Now he has relationships with other people Easterseals Arc serves, both at home and at the Adult Day Center. When he walks through the hallways of the Adult Day Center, he reaches out to people along the way, waving and giving high-fives. He no longer behaves as though he could bolt out of the building. He’s developed social relationships with the other people who live in his group home, waving or touching them gently as he leaves or returns. The hair-pulling is over, softened into touching.

The difference has come through Easterseals Arc personnel, from staff members to top administrators, who’ve taken special interest in him.

At the heart of Tyler’s Easterseals Arc team is Gloria Beau, a Direct Support Professional. She was hired in July 2021 with the understanding that her full-time job would be working one-on-one with Tyler, helping him navigate his new environment in the Adult Day Center.

She’s done much more than that. She’s taken him to restaurants and to services at Lifehouse Church. Some weekends, she visits him in his group home.

“He just loves Gloria!” Slater said. Now when he wants to leave the room that’s home base for him and Beau at the Adult Day Center, he brings Beau with him instead of dashing off. When she needs him to stay put for a few minutes, he waits in a chair in the hallway or stands watching in the hall.

When Beau began working one-on-one with Tyler, she spent hours on end, almost her entire shift, walking hallways in the ADC with him. And Beau, who wears her hair short, quickly learned how to bend her head down and pivot away when his hair-rubbing became hair-pulling.

Soon she and Easterseals Arc behavior consultant Heather Schillinger developed ways to engage him. Sometimes he spent several minutes at a time absorbed in watching Beau assemble his favorite jigsaw puzzle, for example.

“I may do this four or five times,” she said, as she assembled the puzzle depicting Disney character Elena of Avalor. “Every time I finish, I show him. He decides how long we do this.”

Schillinger worked to reduce his tendency to roam and his hair-pulling. At the same time, she tried to improve his ability to communicate.

Redirecting him was the key to reducing his roaming. Schillinger found that the prospect of going for a ride in a car is a reward for good behavior that appeals to him. It’s a kind of high-powered substitute for his longing to roam on foot. To Tyler, she said, a ride means “even if my feet aren’t going, I’m going.”

She said he’s drawn to feeling hair because “he’s a very sensory-driven individual.” He’s compelled to seek sensations, so Schillinger strived to redirect him to sensations besides other people’s hair. For example, he has a piece of shag carpeting in ADC he enjoys feeling. And he delights in smelling vials of scents he keeps in a “sensory box” in a quiet getaway at the ADC called the sensory room. She said he’s also calmed by using his hands to flip through magazines or to manipulate small objects, such as dominoes or little toys in his sensory box.

Communication doesn’t come easily for Tyler, but Beau reported that even in 2021, he began speaking a little more. Sometimes he told visitors “bye” when they left. “Sometimes he says ‘pa’ for please and ‘pa pa’ for pretty please,” she said.

Schillinger is encouraged by any speech he uses, and she also helped him use sign language or gestures that others could interpret better. A breakthrough came in the summer of 2022, when Tyler attended a half-dozen intensive sessions at Purdue Fort Wayne’s Communication Disorders Clinic. Staff and students there introduced him to an iPad system that turns simple symbols into spoken words. The Communication Clinic reported that he took to the iPad loaded with word-symbols quickly. He used it to request, for example, a puzzle, music, food or a drink. He’s scheduled to resume sessions at the Communication Clinic at the beginning of 2023.

Katlyn Rife, Easterseals Arc’s assistant director of group homes, helped staff the group home where Tyler lives when the team at the home was shorthanded. “I wanted to keep an eye on Tyler and make sure he got the supervisory support he needs and that we were doing everything we could for him,” Rife said.

When she worked shifts in the group home, she could see the benefits of intensive work on his communication. Rife noted that he can tap on someone’s shoulder and point to the refrigerator if he’s hungry. “He’ll even point to the meds closet if he isn’t feeling well,” she said.

Tyler doesn’t come back to his family’s home as often as he did last year, but his mother remains deeply involved in his life and care. She still takes him to all his medical appointments. He faces several health challenges, and she provides continuity among so many specialists they’ve consulted over the years.

“I want to be a part of his life. Knowing about his health is a part of that,” Slater said.

What’s different now is that Slater is backed up by the same team that cares for Tyler daily. When Slater takes Tyler to his psychiatrist, for example, behavior consultant Schillinger sometimes accompanies them to provide her expert observations on Tyler’s behavior to the doctor treating him.

The team doesn’t end with Beau and Schillinger. Rife also has gone to appointments. She rode with Tyler and his mother to the Indiana University School of Dentistry in Indianapolis when they were searching for a dentist to care for Tyler.

Tyler’s mother has been able to work more hours at her jobs now that she isn’t caring for Tyler full-time. As she’s seen him adjust better to his group home, he hasn’t been to her home for visits as often. Early on, he was still most settled when he was visiting her in his family home, she said. Now he gets settled at her home but grows agitated after a time. She interprets that agitation as a sign that he wants to return to his home, the group home.

“That’s a big adjustment for me. It can be hard to take,” she said. “But this is his new life, and he loves it.”