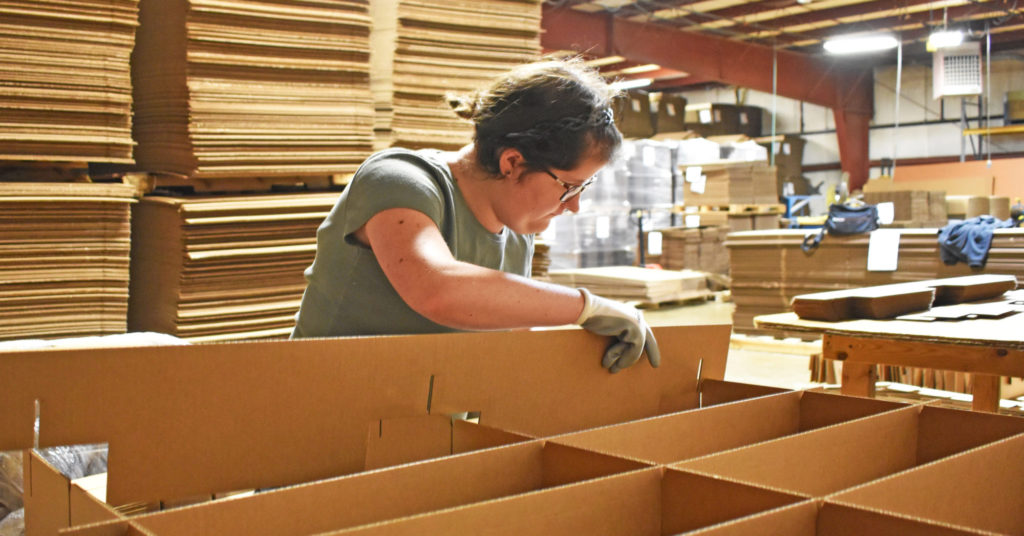 Ashley assembles partitions to fit inside a shipping container at Covington Box and Packaging in Waterloo. 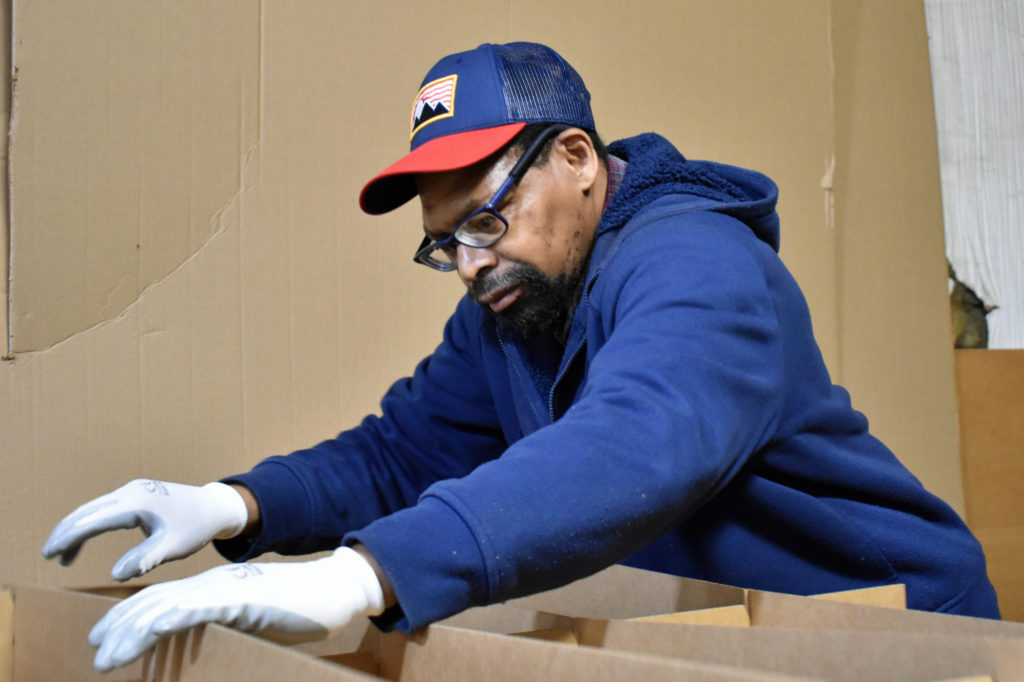 James fits together partitions that will be delivered to CJ Automotive in Butler.

Tasha Haire, of Covington Box, right, shows James, left, and Ashley how to build the partitions they assembled on their first day at Covington Box. Those partitions will be used by CJ Automotive in Butler to separate parts in shipping containers. 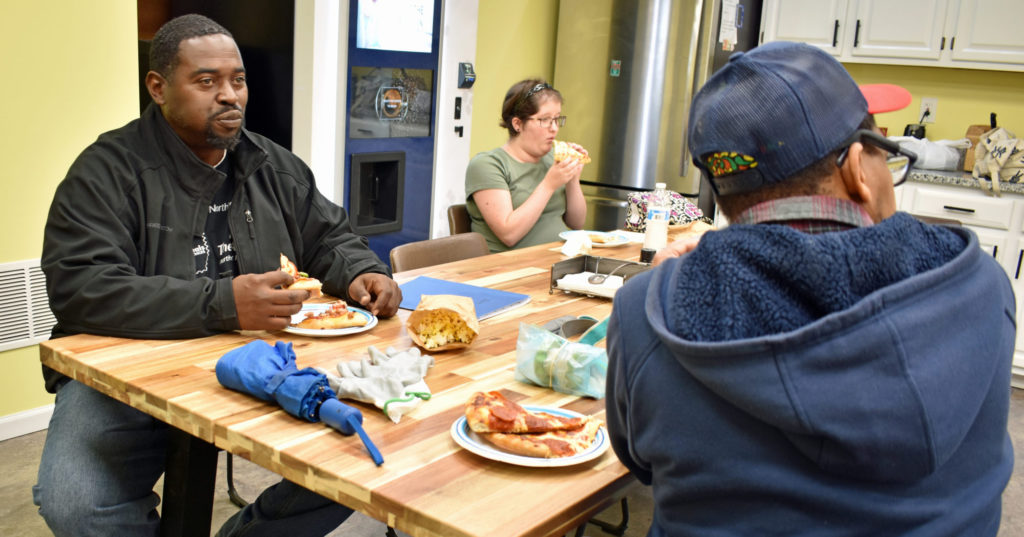 James and Ashley encountered a surprise on their first day of work at Covington Box: The company treated the staff to pizza for lunch. 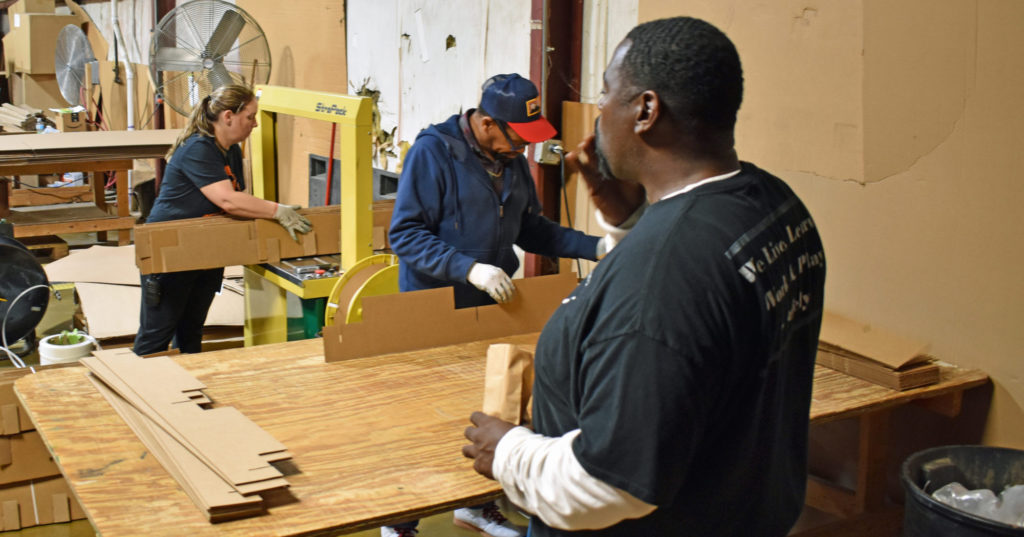 Larry Geans, right, is a supervisor at Easterseals Arc’s Projects Drive Group who helped train Ashley and James on their first day of work at Covington Box and Packaging.

Like so many area businesses, Covington Box & Packaging can’t find enough workers to keep pace with demand from its customers. What it has found is a new source of help: two teams of workers from Easterseals Arc and Easterseals RISE.

Since September 2021, these teams have helped the Waterloo company keep pace with an undiminished stream of orders from other businesses that count on the packaging made by Covington Box.

On her first day working at Covington Box, Ashley, one of the Easterseals Arc participants, looked a little surprised when bags of popcorn – a regular treat the company provides on Fridays – were passed around.

“They had you at popcorn,” joked Larry Geans, a supervisor at Easterseals Arc who works with participants at Covington Box.

Ashley laughed and told him that what really impresses her is the money she’ll make. She listened as he estimated how much money she might bring home from her part-time work there.

“Are you for real?” she exclaimed. He assured her he was serious.

Ashley is part of an enclave of workers from Easterseals Arc. Four people each weekday work from 9 a.m. to 2 p.m., in a shift that includes a lunch break. All come from the Projects Drive Group at Easterseals Arc.

At the same time, Covington Box is the host for a second group of Easterseals participants in an Employment Readiness Academy. Six people participate in the ERA; their schedules are staggered, so that four participants are there each day through the eight-week program. They learn general workplace skills while rotating through different jobs at the plant and gaining valuable hands-on experience. A standout in the ERA or the enclave could have an inside track to being hired directly by the company.

“If they’re comfortable in this culture and this environment, and a job is something they can perform, I would be interested in hiring them,” said Covington Box President Tony Fifer. “My hope, and I know I speak for my supervisors on this, is that we can hire a few of them.”

Plenty of businesses have an ERA or an enclave. But staff members at Easterseals Arc don’t remember a time when an employer has had both an enclave and an ERA at the same time.

“Having the partnership with Easterseals has really helped us,” Fifer said.

“It helps them contribute,” said Suzanne Vertigan, workforce development supervisor at Easterseals Arc. “It gives them a sense of worth. … Earning money for the work that you do then translates into buying things and being more self-sufficient. People who are employed have meaningful relationships. They have a sense of purpose. It fosters independence. It fosters increased communication and friendships.”

Geans, who supervised the enclave that day, said participants making the transition from PDG employment in the community takes some adjusting. The adjustments are made easier by consistently friendly and helpful workers at Covington Box.

“The people here are great,” he said.

Fifer is already a believer when it comes to hiring people with disabilities.

Based on experience with Kenny and Phil, other workers in his shop “embrace them, train them and work alongside them. They don’t look at them as being any different than themselves,” Fifer said. “You’ve got to be open-minded and give them an opportunity.”