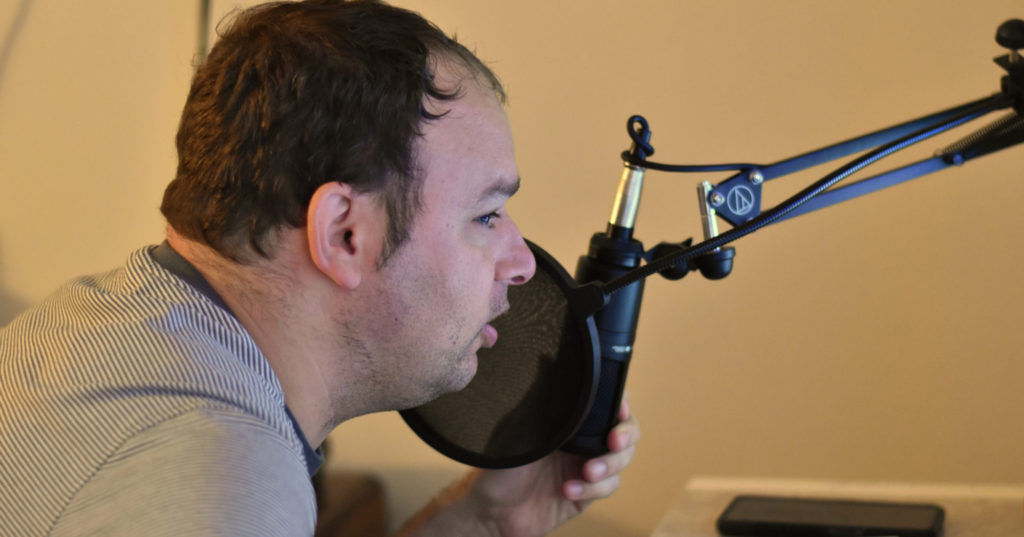 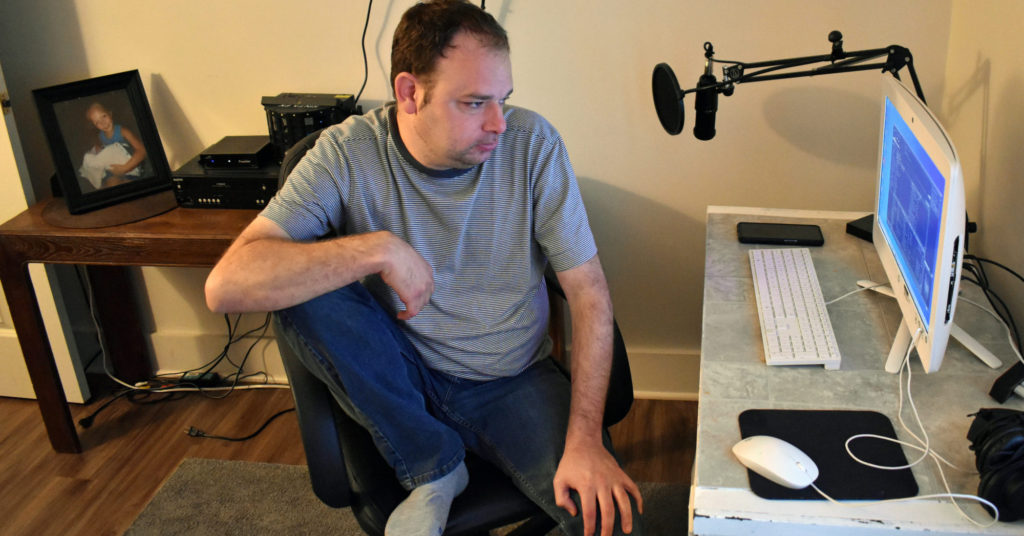 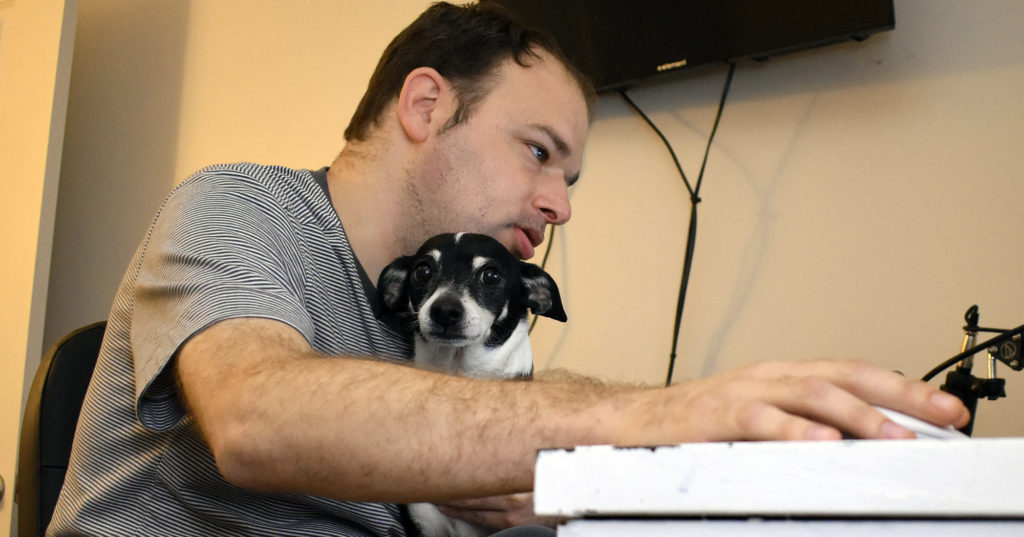 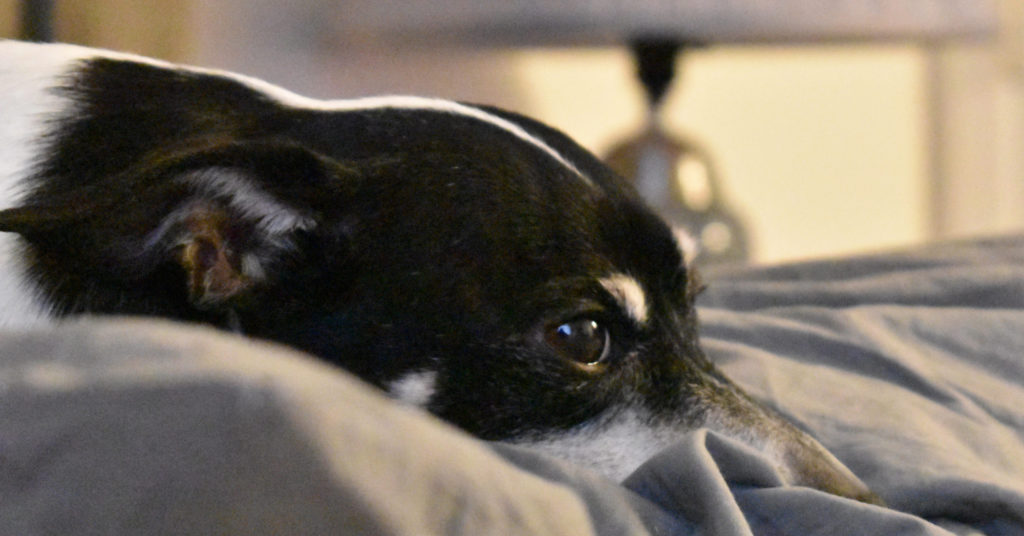 DJ Andrew has been practicing his craft at parties for decades. Now he’s finally a radio DJ, too.

The opportunity came at a great time. The COVID-19 pandemic put an end to the kind of events where he’d worked as a DJ. In recent years, his music selections became the soundtracks of popular events, from summer festivals in the parking lot at Easterseals Arc to the Fall Fling at Project Drive Group to dances at Turnstone Center.

And then … nothing, thanks to the pandemic. His DJ drought ended in June 2021, when he began running his own show on The Spectrum, www.thespectrum239.com. Now he brings his wide-ranging tastes in music to internet audiences for four hours a day, five days a week.

There’s room for almost anything on The Spectrum. The station, available for now only as an internet stream, launched in September 2018. The station’s website says founder John Graham started the station to “empower and give individuals with disabilities a chance to learn about broadcasting.”

Andrew lives by himself in an apartment but has help several times a week from two Easterseals Arc staff members. Andrew does all his broadcasting from a simple studio in his bedroom: a computer, a mixing board, a microphone and an external hard drive, about the size of a small paperback book, that’s packed with songs.

There’s no anticipating where his library of tunes will take him on a given night. In a couple of hours on one night, his picks included songs from Bob Dylan, Bon Jovi, Wilson Pickett, Kool & The Gang, The Chainsmokers, Faith Hill, Wild Cherry, and more.

“I try to have something for everybody,” he said, off the air.

And some songs demand dedications. After he played Cyndi Lauper’s “True Colors,” he added, “My niece loves this song.”

For his nephew, it required more searching. “I love you, little nephew. You know I do, baby boy,” he said, then played, “Twinkle, Twinkle, Little Star.”

No one in his family played a musical instrument, but his mother, Sylvia Cunningham, recalls they always listened to music. “He’s always had music,” she said. “It always calmed him.”

When he was only 6 or 7 years old, Andrew started taking to the front porch of their home with a boom box and a microphone plugged into a little guitar amp. That was enough to DJ for his neighbors.

“We had a pool then, and when neighborhood kids would come over, he’d DJ at the pool,” she said.

In later years, he cultivated other opportunities to play music for a crowd. Making friends with the owner of Bell’s Skating Rink in New Haven, he landed occasional stints playing tunes for skaters. Through Cunningham’s work at American Legion Post 296 on Tillman Road and Post 241 on Bluffton Road, he found some gigs at those posts and at the Eagles lodge on Bluffton Road, she said. Three of her friends hired him to DJ at their weddings.

“His dream is to be a radio announcer,” Cunningham said.

And now, 20 hours a week, he’s getting a taste of his dream at a station designed to let him do it his way. And he’s building quirky traditions on the show, too.

“I do a dog song every show,” he said. “I like to give the dog-lovers something.”

It’s actually more personal than that. His little terrier, Orlando, is his steady companion for every show, watching from his own pillow in the middle of Andrew’s bed. Sometimes Orlando gets excited and jumps into Andrew’s lap while he’s running his show. One recent night, he soothed Orlando with an off-the-air dedication.

“Your song’s coming up soon!” he told the dog.

You can hear DJ Andrew’s show on www.thespectrum239.com:

"I just love music. I have since I was a baby."