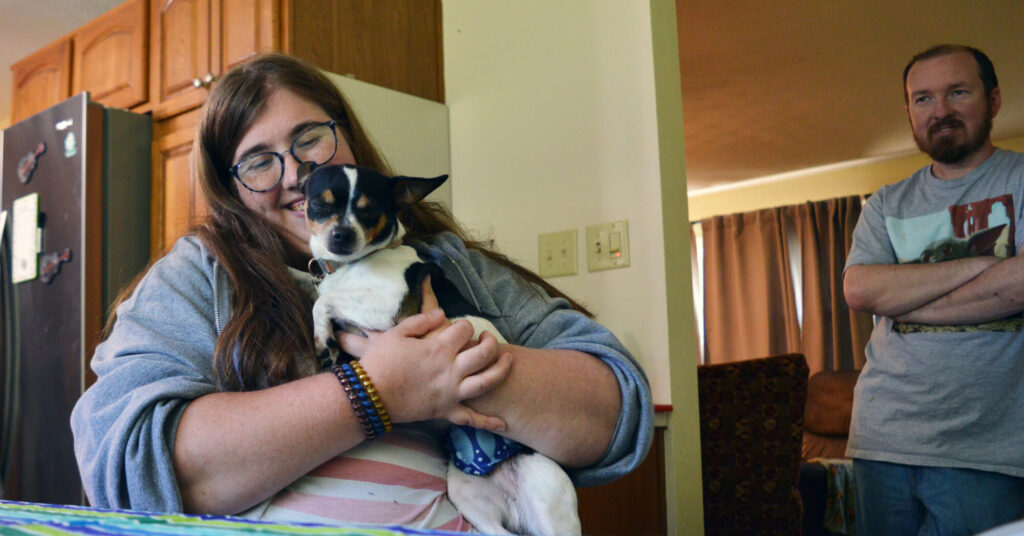 Madelein holds Rocket, one of their two dogs, as her fiance, Charles, watches. 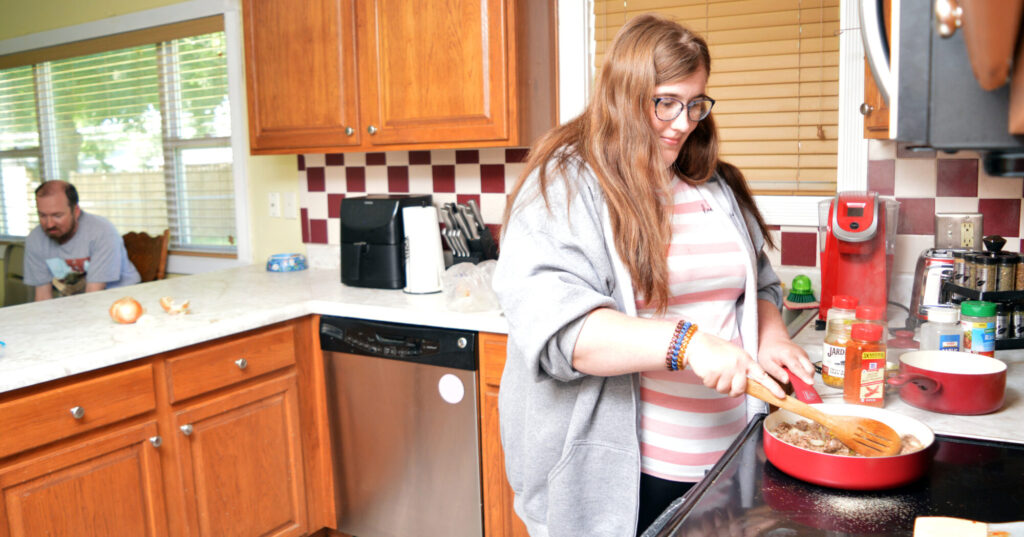 Madelein cooks tacos in the kitchen of the house she and her fiance, Charles, purchased in April. 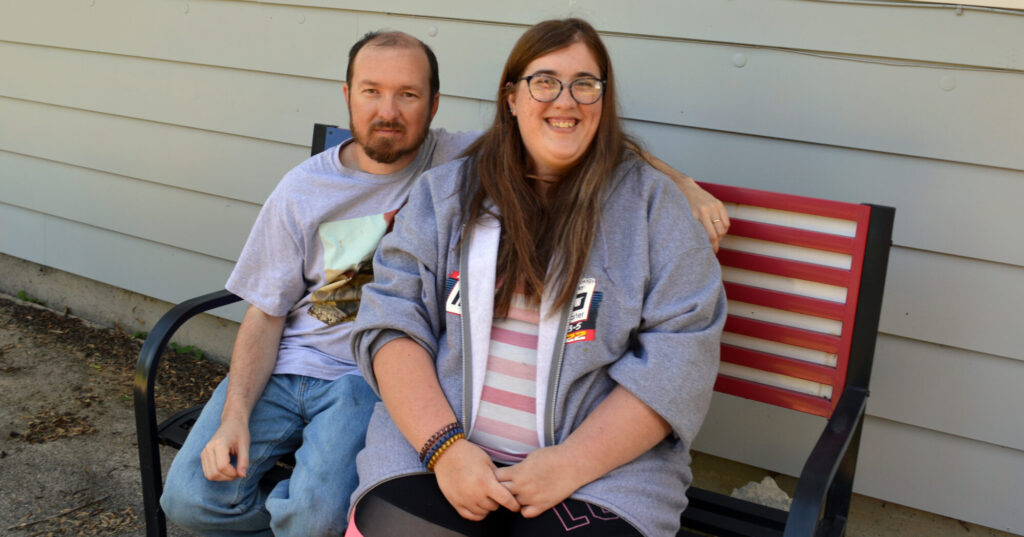 Charles and Madelein sit behind their new home.

Her prospects for becoming more financially independent improved dramatically last year. In July 2021, she started working at the Speedway store at Coldwater and Wallen roads in Fort Wayne. Madelein, 31, had worked successfully at jobs with other companies. At her most recent job before Speedway, with a pet groomer, she couldn’t get a raise beyond minimum wage, $7.25 an hour.

It’s no surprise that she’s doing well at Speedway, according to Megan Bloom, who manages the cafe at that Speedway.

“She’s awesome,” Bloom said of Madelein. “She does everything. She’s very independent. … I know that I can leave her alone in that cafe, and she can handle everything. She never calls off or comes in late.”

Bloom says Madelein can take orders, maintain the “hot cart,” and prepare everything, including all the meat and veggies used in the cafe. She can bake all the cookies, and she’s learned how to clean all the machines in food preparation. She’s learned everything about the job so well that it’s now in her head, not on a written checklist.

“Most of my workers need to make detailed lists,” Bloom said, “but she’s very self-sufficient.”

Besides being self-sufficient, she watches out for what the store and her fellow workers need.

“I try to help both sides of the store,” she said. That means staffing the side where prepared food is sold, her core job, but also pitching in to help people on the side that handles gasoline and convenience-store sales. She can step in to run a cash register or stock the rotating hot-dog warmer or clean counters in the store.

“I really enjoy my job,” she said. “My bosses are super nice. Most of the customers are nice, too. … I work 40 hours. It keeps me busy, but I get two days a week off.”

In the past, serving the public has sometimes been difficult. At Speedway, her managers create a better environment.

In previous jobs, sometimes “I had problems with people being mean to me, so I would leave,” she said. “I haven’t had that issue at Speedway, and they won’t tolerate it.”

Easterseals Arc is working with her as she makes the transition off Social Security benefits. Madelein works with Pat Bailey, an Easterseals Arc behavioral consultant. As Madelein describes their relationship, Bailey helps her work through problems in her personal or work life. It was Bailey who connected her with employment services at Easterseals Arc.

“She’s very independent in her job. She’s well-established in her job,” she said.

What Milligan could help her with was benefits counseling. That helps Madelein move into full-time employment with as little financial disruption as possible.

Another big step toward greater independence came in April 2022 when she and her fiancé, Charles Fischer, bought their first home. They have been together for 11 years. Several years ago, they rented an apartment together in downtown Fort Wayne, but paying more than $800 a month in rent made it hard for them to save toward buying a home.

To build their savings, they moved in with Charles’ father and lived with him for more than four years. Now they’re enjoying a three-bedroom, two-bath home with plenty of room for them and their two dogs and two cats.

They’re getting a dose of the pleasures of having their own home. Like many new homeowners, they immediately plunged into a spree of painting to freshen the look of the 1950s-era house. Only three months after they moved in, they were hosts for six relatives who stayed with them for several days. Madelein enjoys cooking her meals in a spacious, modern kitchen, though she notes that Charles is a picky eater, so much so that he fends for himself. They’ve had a taste of coping with the unpredictable costs of homeownership, too, when they needed to repair their air conditioning this summer.

That’s just a small bump in her path to independence. She loves being a homeowner instead of a renter.

“It’s the next chapter in our lives,” she said.

"I really enjoy my job. My bosses are super nice. Most of the customers are nice, too."